All children and youth–regardless of race, ethnicity, gender, religion, ability, sexuality, background and/or socio-economic status–have the right to explore the philosophical questions that are most meaningful to them in supportive settings. Philosophy for Children “classes” generally aim to uphold this right. Importantly, philosophical dialogues with children and youth can flourish in all sorts of contexts, such K-12 schools, community centers, at home and with family, in churches, libraries and museums, and on the street if the children and youth with whom one is philosophizing are often out and about and/or working.

To communicate and explore the great importance of language, culture and “place” to both of these Philosophy for Children programs, I co-created two short documentaries about these philosophical collaborations. In 2016, thanks to an APA Diversity and Inclusiveness Grant, I was able to serve as the Executive Producer of an 18-minute, bilingual documentary about the Philosophy for Children in the Borderlands program (directed by Julia Reihs). That film can be accessed for free here. In 2013, I co-directed (also with Julia Reihs) a 23-minute, bilingual documentary about the Oaxaca Philosophy for Children Initiative thanks to a grant from the Jennifer Caldwell Endowed Fund in Human Rights. That film can be accessed for free here. 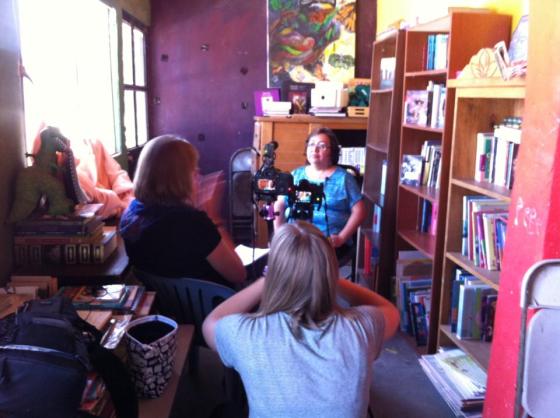 Julia Reihs and I interview Dr. Susana Baez, co-founder of the Biblioteca Independienta Ma’Juana in Ciudad Juarez, Mexico, for the Philosophy for Children in the Borderlands documentary

This work was made possible thanks to the fabulous children and youth who are and/or have been involved in both programs, as well as the following community partners in Oaxaca City, El Paso, and Ciudad Juárez:

Lorena Andrade, Director of La Mujer Obrera, introduces the Philosophy for Children in the Borderlands film at a screening in the Mujer Obrera Museum Space in El Paso, TX